The Sad Truth About Bernie

This Jimmy Dore video is the probably the best and most clear — albeit painful to watch — autopsy of the 2020 Bernie campaign. The video takes a classic “good cop/bad cop” approach. Jimmy is the raging bad cop, shouting with a level of vitriol that turns his face red, making his veins pop. Danny Haiphong serves as the calm, quiet, reasonable, friendly good cop. But they’re making the same devastating points.

So people say that I’m, you know, I’m a loose cannon. “Jimmy’s Dore’s whatever the fuck, you can’t [inaudible].” So that’s why I have on someone like you who’s a fucking real smarty-pants motherfucker who wrote a book about this shit and writes for the “Black Agenda Report”. So there you go. Right in your fucking asses [accompanied by a certain well-known finger gesture].

Look, I have a Bernie beanie, and a Bernie sweatshirt, and I’m still donating $17 a month to the campaign.

While I can’t disagree with the “feckless” conclusions of the video, I feel like what is being missed in Bernie’s epic failure is the other side of the “receipts” coin. “Receipts” was Bernie’s answer to the question: “Aren’t you too old?” Receipts is about how Bernie has been consistently promoting the same worker-centric policies for over 40 years.

It’s a good argument, but there’s a flip side to this same coin. Forty years ago, Reagan was about to trounce Jimmy Carter, and start a 40 year march of both parties to the sharp political right.

Yet forty years ago, there was good old independent Bernie, just starting out as the Socialist mayor of Burlington, Vermont. By the time Bernie entered Congress in 1988, senile Reagan was handing over the reins to Bush the senior. By the time Bernie entered the Senate in 2006, Bush the junior had driven us into the disaster of Iraq. Bernie was one of the few to vote against that awful, misguided war.

How the hell did the whole country, and especially the US government, lurch hard to the right, while Bernie kept holding onto his progressive ideals — for 40 fricking years?

This is where it serves to recognize that different people have different temperaments. Take Jimmy Dore. That’s one angry dude. Take Danny Haiphong. That’s one calm dude. Are they just acting in that video?

I don’t think so. I think they were both exhibiting their natural temperaments. Jimmy is an angry and confrontational truth teller. Danny is a calm, uncompromising, truth teller.

Well, there are temperaments for which a main trait is “non-confrontational”. That’s what the Politico article a few days ago said about AOC. It said she’s inherently non-confrontational. So that explains how AOC went from occupying Pelosi’s office with the Sunrise movement on her first day in office; to recently calling Pelosi the “mama bear of the Democratic party.”

Bernie is also congenitally non-confrontational. This is likely how he has survived politically for 40 years holding onto to progressive policies amidst a howling tornado of right-wing reactionary rhetoric from both parties. 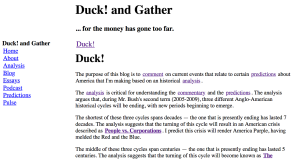 So this is an amazing moment in American political history. In other writings, I have argued that America entered a “People vs Corporations” “war” around 2008. This “war” is analogous to the Great Depression/World War II, the Civil War, the American Revolutionary War, and so on backwards in history.

By the time each of those wars was engaged, most everyone knew who the combatants were, and what the the values of each side were. Each side had its unambiguous champions. History most clearly remembers the champions of the victor.

For the Great Depression/World War II, one of the greatest champions was labor leader Eugene Debs.

For the Civil War, perhaps the most noteworthy early champion was abolitionist John Brown.

For the American Revolution, a leading foundational voice was colonial rebel Samuel Adams.

Each of these champions not only believed in his respective cause, and supported that cause, but risked or even experienced prison or death in his passionate, unmitigated pursuit of the cause.

Before Bernie and AOC, who was the Eugene Debs, the John Brown, the Samuel Adams, of the progressive left?

Ralph frigging Nader? I don’t know. I don’t think there was one who will take their place in history alongside these three great men.

But then neither Bernie nor AOC can be that champion. The non-confrontational temperament of each person excludes them from this role.

So this is what Jimmy Dore was shouting about, and what Danny Haiphong was patiently explaining. Here is my summary of the 50 minute video:

Here we are, in the midst of this covid-19 pandemic, with millions upon millions of Americans becoming unemployed and losing their healthcare thereby, thus courting an untimely and unjust death. And in this golden moment of political opportunity, who is the champion of the People who will call out the corrupt members of the US government for what they are, demand rent strikes, mortgage strikes, and so on?

As the (painful) video explains, it ain’t Bernie.

And as we all know now, it ain’t AOC. (Hey AOC, do you think John Brown hired two slaveholders as his right-hand men on his march to Harpers Ferry? Do you think Eugene Debs called Woodrow Wilson the “papa bear of Democratic Party” in pushing for the rights of workers? Did Samuel Adams choose to support only 2 of the 12 other rebel states because he was afraid to offend the British? Well, honey, the answers are “no”, “no”, and “no”. What a disappointment you are, AOC.)

This entry was posted on April 5, 2020 by peter in people vs. corporations.